The Flags of Scotland 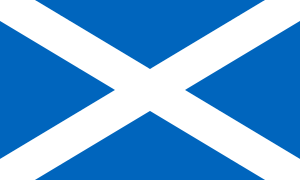 The Flag of Scotland consists of a white Andrew’s Cross (saltire) on a light blue Ground. A rarely used variant has a dark blue Ground. It is one of the oldest Flags in the world and dates back to the 9th Century. According to tradition, a King Hungus (or Angus) led the Picts and Scotti into a Battle against the Anglo-Saxons in 832 and was surrounded with his Soldiers. He prayed for Salvation. During the night, the Apostle Andrew -who had been crucified on a diagonal cross- reassured him.
At dawn, the Clouds in the blue Sky took the Shape of a diagonal cross, encouraging the Picts and Scotti, while the Anglo-Saxons were frightened and finally defeated. Since then, the Andrew’s Cross has been the Flag of Scotland. Relics of the Saint were later brought to Scotland and the City, which was subsequently called St. Andrews.

There is no exact definition for the blue hue.
The blue used varied over the Centuries, ranging from a bright sky blue to a dark navy blue. In a joke, the color choice was based on which blue hue was available at the lowest price. Recently, however, it seems that the Pantone 300 shade has been agreed upon. No matter which color is used, it must always be lighter than the one on the Union Jack. The size ratio is also not officially specified but is generally stated as 3:5 or 2:3 (with a longer version being preferred, that would be the former – British flags are usually 1:2, even longer than wide); but in the literature is also 4:5 to find. The width of the crossbar should in any case be one fifth of the flag height. 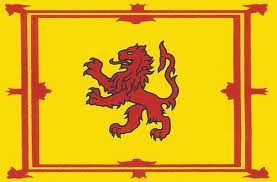 The Coat of Arms and the Flag of the Scottish Kings show at least since 1332 a red, rising Lion on a golden Background. He is surrounded by a red lily double beam. Already in the early 13th century, the Lion was adopted by William Ist (also called William the Lion). For the first time it can be proven in 1222 in the Seal of his Son Alexander II. as a heraldic Animal. At the beginning of the anglo-scottish Personal Union 1603, the Coat of Arms was incorporated into the United Kingdom and has since been seen on its Royal Flag.

The use of the Flag is reserved for the Monarchy and is officially raised at the scottish Residences of the Royal House in Holyrood Palace and Balmoral Castle when the Queen is present. Also, the Representatives of the Queen, including the First Minister of Scotland, the Lord Lieutenants and the Lord Lyon King of Arms, are allowed to hold the Flag. According to the Law of the Parliament of Scotland of 1672, it is protected as a personal Banner of the Queen. Nevertheless, it is so popular as an alternative Flag for Scotland (for example, at sporting events) that it would be politically impossible to prosecute anyone.

In addition, the Lion Rambant also appears in the Flag of the Duke of Rothesay, the eldest Son of the respective Monarch.