The History of the Kilt 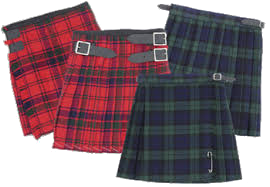 If you think of things that are typical for Scotland, you also think of him … the Kilt with his Tartan. The Garment of a Highlander. The length of the Kilt is chosen so that it reaches the wearer up to his Knees, but when he “kneels down” he does not touch the Ground. According to a legend one should also be able to recognize whether the carrier is married or single. If the knee is clearly visible, he is single, if the knee is covered by the kilt it is a sign, that he is promised or married. However, I consider this a Myth, as I could not find any Evidence or Reference. The Kilt as it is known today is an Invention of the 18th century.

The oldest find of a check pattern in a fabric -the so-called ‘Falkirk Sett’, or the shepard’s plaid– dates from the 3rd century BC. However, this Clothing contained Pants and no Kilt or Belted Plaid and it can also be detected no connection to today’s Clan Tartans.
The Tartan -supposedly derived from the french Word for Turtle- is a special Pattern that today is assigned to a particular Clan, or Region. The pattern is partially distinguished as follows:

This is the pattern that is usually worn everyday.
Today this is mostly a modern tartan. So-called ancient tartans are also common.

The Mourning Tartan is predominantly black-white.
It is usually worn at funerals.

The Dress-Tartan is a slightly lighter colored version of the clan tartan.
It is usually worn by women. But it is also the preferred kilt pattern for formal occasions.

The Hunting Tartan consists mainly of muted, natural colors.
It is worn for hunting and sports. If there is no Dress-Tratan, or if one does not own one, it is worn on formal occasions instead.

The first known mentions of a Tartan were in 1471 for James III. and in a 1538 accounting Book for a Bale ‘Heland Tartan’ for James V. A Tartan ribbon was also used for the Wedding Cloak Charles II.
As the Patterns of the Tartans looked exactly can not be said today, as was lost by a Kilt ban in 1746, the knowledge of Production and Coloring of the time. However, what speaks against a Clan-reserved Tartan is that its relatives could easily be identified in a time of Feuds and Wars, which was not really conducive to Life and Limb. The oldest-proven-Tartans are assigned to Regions (districts). It is believed that Weavers and Residents preferred local Patterns and Dyes and dressed accordingly. One of these Tartans is the Huntly Tartan, from northeastern Scotland, and was bred by several Clans during the Jacobite Rebellion. Even Bonnie Prince Charlie is said to have worn a variant of it. Furthermore, it is assumed that the Pattern of the wealth of the Carrier was recognizable. While “Poor´s” donned monochrome or simple Patterns, richer, more elaborate, multi-colored patterns could afford themselves.

When the Kilt in its original form emerged as the ‘Belted Plaid’ is hidden in the Fog of History. The first official mention of the Term-also as a garment- is found in the middle of the 16th century in the times of Elizabeth I. Before the Kilt, Trousers or long Tunic were worn.
The Belted Plaid was Blanket and Clothes in one. In the hot Summer Months, either only the long Shirt tied between the legs or a thin woven Plaid was worn. The Word Kilt is Old Norse and means something like “wrapping Fabric around the Body”. In Scotland, the Term was introduced by scandinavian Immigrants in the first Centuries of Scotland, who wore similar Clothing.

Although the first written Mention of the 16th century Belted Plaid dates back to the earliest times, oral tradition dates the advent of this Garment in the early 15th Century. Since, in contrast to today, a clothing style developed over a certain period of time and was not suddenly there, some assume that the Belted Plaid was widespread in the late Middle Ages at the end of the 15th century.

The Kilt or Belted Plaid consisted of a 4-8m long and 1.5m wide Fabric, depending on the carrier and laying technique, in which the middle part is folded and “wrapped” around the Body. Before someone complains now … The Looms could weave a maximum width of about 80cm. Therefore, often a 8m long web was woven, which was then divided and sewn laterally to get to 4 X 1.5 – 1.6m.
The whole thing was held by a Belt at the Hip, while the rest of the material either hung down behind or was placed around the upper body.

According to legend, the Kilt as we know it today was invented in 1725 by the english Industrialist Thomas Rawlinson. Thinking that the voluminous Plaids were a hindrance and too dangerous for the work, he cut off the top or the remaining part and sewed the folds into the Fabric. Another legend says that a Scot had previously developed this Version of the Kilt -the Early Kilt- which, however, did not prevail in the population. Essentially, the Early Kilt differs in that the upper / the remaining part is also missing, but the wrinkles are not sewn. However, the fact is that ‘The Armorial Bearings of the Chief oft the Skenes’ of 1692 already shows this ‘shortened’ Kilt. 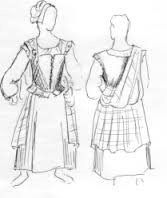 As everyone knows, wearing a Kilt is reserved for the male. But what did the ladies wear? For they, there was the Arisad, which differed from the Kilt in two main points. While the Kilt has many wrinkles and knee length, the arisad has less wrinkles and is floor-length.

After the Jacobite Uprisings (1688-1746), not only the Clan System was abolished by the british Parliament, but also the wearing of Kilts was forbidden to superficially break the scottish self-confidence. The reason for this was that the Plaid was the ideal Garment for highwaymen, rebels and assassins, as it would make it easy to hide in the Bushes and disguise them on a heath. Furthermore, one could spontaneously join a rebellion because the Plaid could also be used as blanket and the insurgents did not have to pack their things first at home.
Only a few exceptions, it was still allowed to wear the Kilt. As a result, the Military had a heavy influx, as the Highland Regiment was among those exceptions.

When, from 1760, Poems and Stories by James Macpherson and Sir Walter Scott appeared, the tide turned. Spurred on by these works, Great Britain stumbled on a Scotland Euphoria, which the Dress Act 1782 was lifted again. The climax of the excitement, came in 1822 with George IV’s trip to Scotland, where he also wore Kilt.

Although the assignment of a Tartan to a particular Clan is not really tenable, the Scots today like to wear their Tartan, although there are also neutral patterns. These bear rather than the Clan name, a Region (e.g., Edingburgh Tartan) or an Organization (e.g., Royal Scottish Country Dance Society) or are kept completely free of such associations. It is also no control carried out whether the one who is entitled to wear the respective Tartan. “Foreigners” are free to choose between all Tartan Patterns, although in Scotland the wearing of a Clan Tartan by strangers is not welcome, unless they have the permission or are members of a Clan Society.
In fact, there is no legally binding Rule that would prohibit this. This is reflected above all in the fact that more and more  Not-Scots are identifying with the scottish Culture and the Scots are very happy about this development.

With a few exceptions, the Kilt is today less than everyday clothing. Usually it is “only” worn at festive Events or by teams at sporting Events, with there being an increasing trend towards Kilt.

A Kilt is known to have no Pockets. Nevertheless, to be able to carry his personal belongings (Identity Card, Keys, etc.) with you, there is the Sporran (gaelic for Purse). This is a brown or black fur leather bag which is usually worn on the front with a Belt. Sporran distinguishes between every day and festive Sporran. While the everyday Sporran, rather simple – in most cases, there are three Leather or Coat Tassel as an adornment to be held on it, are festive Sporran larger and more elaborately decorated. Horsehair Sporran belong to the Regimental Uniform and are also worn by the Piper.

The Sgian Dubh (gaelic Black Dagger) or stocking dagger is a traditional Knife. It was hidden in Kilt Stockings -the so-called Hoses- worn because the Scots was prohibited by the ‘Disarming Act’ of 1716 to carry weapons and belongs since the 18th Century to ‘Kilt Equipment’.
It is not sure what the black refers to. Although the handles were usually made of black Ebony, it could also refer to black = hidden.
The Sgian Dubh is said to have evolved from the less well known 17th Century used Sgian Achlais, which was usually used as a tool and cutlery. Legend has it that the Sgian Dubh was worn on the inside during War time and during peace on the outside of the leg .

Today, the Sgian dubh is one of the traditional Knives and is usually worn in the right stocking because there was more right than left-handed.

…or what does the Scot wear underneath

What does the Scot wear underneath?
This well-guarded secret has been preoccupying some for generations, most probably the Ladies in front.

In fact, the rumor from below without is an invention of the Lowlanders, who wanted to distinguish themselves from the “barbarian” Highlander and wear the Kilt only since the time of Queen Victoria. But the fact is … There was no underwear.
So what did a Highlander do about “free swinging”? On the whole, there were two Options. Either the relatively long Shirt between the Legs was tied together, or one wore a special Shirt, which was longer at the back. This bib was pulled through the Legs and fastened with Buttons on the front. Today it is up to each one to decide whether he wears something under the Kilt or not. However, it is mostly the younger Men who leave the underwear off when they want to meet Women.
Only the Highland Regiment was issued a Regulation between 1700 and 1800 prohibiting the wearing of Underwear. However, this served only to better against Vermin (pubic lice) to be able to prevent. The arrangement lasted for about 300 years and was abolished around 2000.

What about those Pictures that you know of Parades for the Queen, where you can see that the wearer does not wear anything underneath? These Pictures are fakes. Photoshop makes it possible.

The “Art Scene” also dealt with this Question and answered it with a wink in “The drunken Scotsman”.
I myself have looked into the possible evolution of Scottish dress and have summarized it in this short video.

I was often asked if it would be difficult to lay a Belted Plaid or how it would work.
Since I can’t be at every event with my demonstrations, I made a small, simple video tutorial  for how you can wear a Belted Plaid. Another one for women’s variant Arisaid is being planned.

This guide refers to today’s Method of putting the plaid. One can not assume that the Scots made the “effort” the plaid always accurately, especially since the soil was often heavily polluted and it also had to go fast. There are drawings with Slits in the Plaid. Some Historians therefore agree that the Plaid was feathered in these “Belt Loops” and then tied around the body, automatically forming wrinkles.